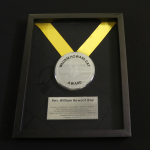 The award, initiated in 2017, recognizes innovative leadership in public school board governance, administration and teaching.

Presented annually as a part of the Excellence in Public Education dinner, the awards seeks to  recognize innovative leadership in public schools through three categories:

Each award will include a financial award:

Nominations will be accepted through September 30, 2021. A committee of PSBA staff and volunteers will be convened to review all nominations and determine recipients.

All award recipients will be invited to attend the PaPEF dinner at the PSBA conference and be provided with a $200 travel stipend. Recipients must be a part of a PSBA member district at the time of nomination and receipt of the award.

Please submit your nominations for the 2021 Innovation Award.

Established in 2017, the Distinguished Service Pin recognizes PSBA members, staff and education advocates for their extraordinary service and work on behalf of PSBA, their local boards and public education across the commonwealth.

In 2019, the PSBA Governing Board adopted a recognition program for school directors that have continued their learning throughout their terms on their local boards. This PSBA designation shall be awarded to all school directors who successfully complete a rigorous combination of online and in-person training and submit the program application. Current school directors serving at a PSBA-member district may apply at any time to receive the designation of “Accredited School Director Leader” (PSBA-ASDL) via an application available on the PSBA website beginning fall 2020. Details of the process will be made available during the October PSBA Leadership Conference for members interested in applying for the ASDL designation.

Requirements
Along with a completed application, the member must demonstrate completion and/or participation in the following:

Validation of the completed application will occur at the next regularly scheduled meeting of the PSBA Governing Board. Approved ASDL® designations are valid for a minimum of 12 months or until June 30 of the following year – whichever is greater. Recipients are permitted to use the ASDL® designation/logo and will receive recognition at their local school board meeting, acknowledgement of completion at the annual conference, and a listing on the PSBA website.

Active vs. Retired Designation
Current school directors may maintain their ASDL® designation by attending the PASA/PSBA Leadership Conference annually or attending their local sectional meeting and completing two additional PSBA webinars, online courses or live trainings/seminars. Active ASDL® members are invited to attend an annual private briefing at the conference.  Retired ASDL® members may continue to use the designation of ASDL-R® and are not required to complete any further continuing education.

Grandfathering
In recognition of their completion of the rigorous curriculum associated with the PSBA Master School Board Director and PSBA Fellows Program, all past recipients of these designations were granted either the ASDL® or ASDL-R® designations effective January 1, 2020.

The guidelines may be adjusted based on alterations made to program offerings with the approval of the CEO or his/her designee. Adjustments will only be made on an annual basis at the conclusion of the PSBA fiscal year. The PSBA Governing Board reserves the right to remove the ASDL recognition from any recipient upon review of their current status as an elected school director or other matters.

The Allwein Society is a recognition program honoring school directors who are outstanding leaders and advocates on behalf of public schools and students. This prestigious honor was created in 2011 in memory of Timothy M. Allwein, a former PSBA staff member who exemplified the integrity, dedication and commitment to advance political action for the benefit of public education. Tim inspired and helped many others to become successful advocates. Originally called the Allwein Award, the name was changed to Allwein Society in 2018 to reflect the ongoing nature of advocacy work. Nominations are accepted year-round and new inductees are recognized annually during the fall PASA-PSBA School Leadership Conference. Click here for more information about the Allwein Society. Learn more about current Allwein Society members.