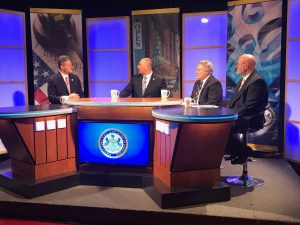 PSBA President-elect Eric Wolfgang (second from right), appeared as a guest on Inside Pennsylvania Boroughs, a television program of the Pennsylvania State Association of Boroughs (PSAB), which airs on PCN. Topics discussed were the role of the school resource officer, Act 44 and the Safe2Say Something program.
Air dates are:

PSBA is actively monitoring COVID-19 to provide timely guidance to our member districts.
For the most up to date news releases, checklists, and guides, please visit our Coronavirus Resource page.